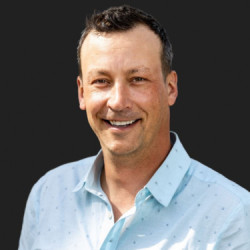 Nick Craswell’s very first job, which everyone will find this a little humorous, was as the local mascot for a radio station in Prince Edward Island. Nick would suit up as a Hostess Munchie and attend local events and parades and hand out chips and pop to kids.

Nick began his life as an Operating Engineer when he and his wife made the decision to relocate to Alberta from P.E.I. Nick had been involved in the construction industry before leaving P.E.I., and accepted a position as a Survey Assistant with HCS Focus (WSP). Shortly after beginning his role in the construction industry, Nick accepted the role of a Job Steward. Nick worked in the field as a rank and file member from November 2005, was initiated to Local Union No. 955 in December 2005.

Nick applied for the role of Business Agent in the Northern District and was the successful Candidate in October 2009. Nick feels his abilities as an active listener is one of the better skills he has. Nick enjoys public and engaging with people.

Nick’s best job was working at a hotel in Scotland, where he first learned about progressive discipline and viewed firsthand what a great management team can look like. Nick had a particular General Foreman that took me under his wing, during his work in the field. This individual challenged Nick to learn and provided him the opportunity to progress his skills and knowledge.

Nick’s father wore many hats throughout his career and was a large influence in Nick’s life. His father helped Nick organize his first workplace and taught him, life is never a walk in the park and we all need to rise up to challenges and stand up for those who might not have a voice. Nick’s father eventually moved on to a management roll where he again passed on this firsthand experience to Nick advising, you have to earn the employees respect and trust by your actions, not just what you promise.

Nick truly believes Unions are needed now more than ever. With the ever changing political situations, work place environments and economical challenges. One belief Nick holds very close is Member engagement. The Union is only as strong as its membership. Nick focuses on representing and educating our members.

Safety is something Nick practices at work and even more so, at home. Nick used to take greater risks in life, playtime and projects. Through working in an Operating Engineers Unionized workplace, Nick has learned that any job can be accomplished and finished without injury. Take your time, plan it out, and get the right tools for the job.