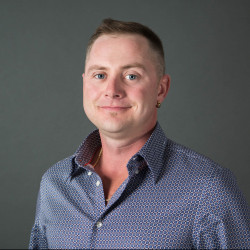 Coleman Powell’s first job may have been at the age of 11 working on a vegetable farm in northeast Edmonton, but he was raised in a union-friendly family. His father worked in a union manufacturing plant in Edmonton. Coleman remembers their family’s quality of life improving once their father joined the Union. Not only were they financially better off, but their father was able to spend more time with his family.

Many years later, Coleman joined the Labours Union, Local 92 where he worked in materials management, and ran a forklift. In August 2012, he joined Local 955 and progressively became a Red Seal Mobile Crane Operator.

Coleman’s first Local 955 Job Steward was Brother Keith Sanmaeir, who always stood out as a perfect gentleman. It was Brother Keith that educated Coleman on the role of the Union and its Members. He was also present for the very proud moment of Coleman being sworn into the Union. Brother Keith has always been an influential presence for Coleman.

Coleman credits Brother Casey Willsey as having had the biggest influence in his career. Brother Casey was a great mentor and helped Coleman more than he realized at the time. Years down the road, the impact if this mentorship has revealed itself. Coleman hopes to one day have the same influence on new brothers and sisters the way Brother Casey has on him.