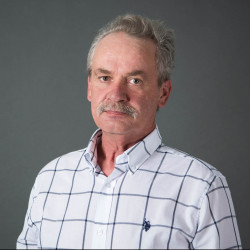 Casey grew up as a farm kid and was no stranger to hard work. His first official job was at the age of 18 years old, building roof trusses.

At 22, Casey became a Coal Miner, starting as an Equipment Operator and after 8 years moved to the coal prep plant and has continued to advance to his current role in the last 15 years, as a Light Duty Mechanic. Casey became a member of the Operating Engineers in 1987 when he started at Coal Valley.

Working in the mining industry has been Casey’s best working experience, allowing him to try many things. It has also given him the pay and benefits to live a comfortable life, allowing him to be home every day.

Casey feels the strongest skill he brings to his job is his work ethic, not only wanting to be the best he can at whatever he is doing, but helping others be successful.

Casey attributes his father as being his biggest influence, always teaching him that hard work pays off and to commit fully to everything he does. He also thanks Frank Araneda for influencing him as a Union Member. Both Casey and Frank have grown together in the field and in the Union.

As an Executive Board Member, Casey’s goal is to try and benefit the Union using his experience as a Job Steward drawing from the different types of issues he has dealt with over the years. He wants to leave the Executive Board and Union better than he found it, and has always felt that you cannot complain if you are not willing to help solve problems.

Safety is the most important thing and Casey believes everyone should help each other make it home in one piece for their family, themselves, and the company they work for.